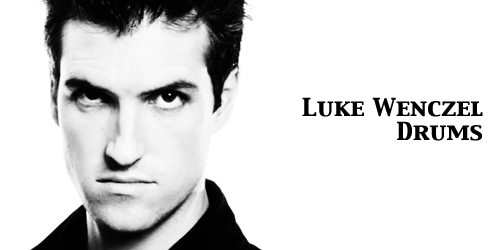 My first and perhaps largest influence is Nicko McBrain of Iron Maiden. The way Nicko makes his drums bark and crack and the tones he struck out of them through the 80s have heavily influenced my drumming. The other aspect of Nicko’s drumming that perks my ears time and time again are his stickings through rolls and fills from a lot of the albums in the mid 80s – they blew my mind when I was starting out and still do today – the opening fill in Powerslave and the ensuing rolls throughout the track are a great example. Nicko is the reason I have more than a few toms and a raft of Paiste cymbals! He is also the reason I mount my Ride cymbal up over the toms almost vertically.

Danny Carey of Tool is another ongoing influence. His creativity and expression behind the kit really speaks volumes and adds to the tracks he plays on to no end. Danny is a drummer of many layers. The playing he hammered out for Tool’s third release Ænima is something I always come back to and rediscover. Danny’s the reason I play a 14×8 inch snare and, like Nicko, he plays his Ride in the same place. A few of his cymbal choices have also made their way into my set-up, mainly the effect cymbals, the china and splashes!

From the current prog/power metal bands, Casey Grillo of Kamelot introduced me to the joys of playing double kick and the power that can be achieved with it, especially on the albums The Fourth Legacy, Karma and Epica. Casey plays what I like to call ‘musical double kick’; it’s in the pocket and lifts and accentuates the music.

There are many great drummers out there, the ones I have mentioned have perhaps had the greatest influence on my playing to date, but every drummer I hear is like a new discovery and adds to my interest in the instrument.

I came to drums at an age I think most people would consider quite late. I was 16 when I got my first drum kit and formed a small band with some people at school who were into similar music. As my abilities were developing, the band members changed around me until finally there was a consistent group of members and we formed a band named Poseidon. We played more on the rock side than metal and did very little, only playing a few local shows until we disbanded and went on to other things. I hunted around for what was probably 2 or 3 years trying to find players who had heard of the bands I was then listening to – prog/power metal. I went along to a few auditions and met some great people, but nothing was quite right. Finally, I met up with Robb Inglis and another guitarist and we played a few Maiden covers and the seeds of DA were sewn.

What DA Means To Me

For me DA is a great outlet for expression and a space where I can be motivated and challenged musically. The journey this band has taken could not have been scripted and it has been all the more exciting because of that. I can’t wait for the next stage in the band’s life to unfold. I am wondering where it will take us, how we’re going to get there, what’s going to happen along the way and who are we going to meet? DA is very much a part of my life’s journey and a story I can hopefully one day tell my children and grandchildren to inspire them to chase their own dreams.